People from foreign countries know some Japanese words nowadays if they are interested in Japan. I’m happy with it.

By the way, I’m wondering why they tend to put their palms together whilst saying Arigato.

If we express our thanks, we do bow. Without putting the palms together. 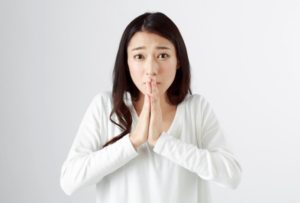 For sure, we sometimes put the palms together as well, but we do it if we want to apologise. In addition, the gesture is used only for the case isn’t serious. If we desperately want to apologise, we bow deeply.

We imagine Thai people if we see putting the palms together with thanks. I’m wondering if people who do it towards us mix Asian countries up because such a Buddhism praying way is common in whole Asia.

Maybe, Thailand would be the only one country among Buddhism countries which putting the palms together with thanks. I don’t have an impression towards Chinese or Myanmar and so on, do the gesture at least.

Oh, some Indian people might do it. I have seen the Prime Minister Modi did it.

Where did you know it?

I’m wondering if there are books or something which explain it something like that. Or if people in foreign countries just mix Asian cultures up.

I personally feel like people in foreign countries who are interested in Japan tend to do that gesture, especially people from countries except Asia. So I guess such information would be written in some books or on the internet. In fact, I seldom see that just tourists from foreign countries and international students do it.

Unfortunately, it seems like our cultures are slightly twisted and exported to the world. It’s ironic because most of them who misunderstand it are rather interested in Japan.

One of our faults

I don’t know why but we tend to try to follow people’s expectation if it looks like they have a specific impression towards Japan. Even if it’s wrong in real. Something like we don’t want to break their dream somehow. It’s our bad habit.

This is one of them.

She is half French, half Japanese, but she grew up in Japan most of her life. I mean, I think she is obviously a Japanese, and wouldn’t have misunderstood our culture. She would have known we usually don’t do such a gesture in the scene where she did.

Remember, I’m not going to blame her. I guess the Japanese team which planed the presentation would have thought people in the world would think we put our palms together if we express thanks. So they would have decided to let her doing the gesture. What a ridiculous decision.

By the way, it became a topic in Japan back then. A lot of people said why they spread wrong culture.

Do you want to fit into Japanese society?

We rather bow a lot (not deeply) anyway if we want to express our thanks. That’s why if you copy them and bow a lot it looks good to us.

Of course, even if you put our palms together whilst saying Arigato, it’s not rude for us at all. However, something is wrong to us. Looks like you misunderstand something.

If you keep it in mind we are more happy.

Ok then, that’s all today. See you!