Do you have a specific exercise which all of your people know?

We have an exercise called “ラジオ体操(Radio exercise / Radio Taiso workout)”, I have NEVER seen Japanese who don’t know it.

Let me show you what it is. Here we go.

The Japanese exercise is made from 2 parts, we basically call the part 1 “Radio exercise” nowadays. I’m going to explain it now too.

Radio exercise is made in 1951, it’s aired on radio since that year. And then, it started to be aired on TV as well.

In summer break, kids go to a place where it’s referred by the local government, and they do Radio exercise. They get a stamp on their Radio exercise card after doing it. They do it every morning during the summer break every year.

Since all generations experienced it, everyone is know and able to do it nowadays.

How to do Radio exercise

You follow the video. It’s explained in English, and it seems like there are the Italian version and the Susu (Guinea) version as well.

Anyway, try it once. It would be a bit tough if you do it properly.

Not only for kids

It’s actually done at a lot of workplaces as well before they start to work every morning. I also did it at some of my former workplaces.

It’s because Radio exercise is the easiest for everyone nowadays. I mean, we don’t have to learn it first because it’s not new to everyone. Even if a boss suddenly says “Do Radio exercise, now!” and plays the song, everyone is able to do it.

That’s why Radio exercise is familiar for a lot of adults as well.

If you are interested in Radio exercise, try to find Japanese who don’t know it. I am sure you wouldn’t be able to find them. Hahaha 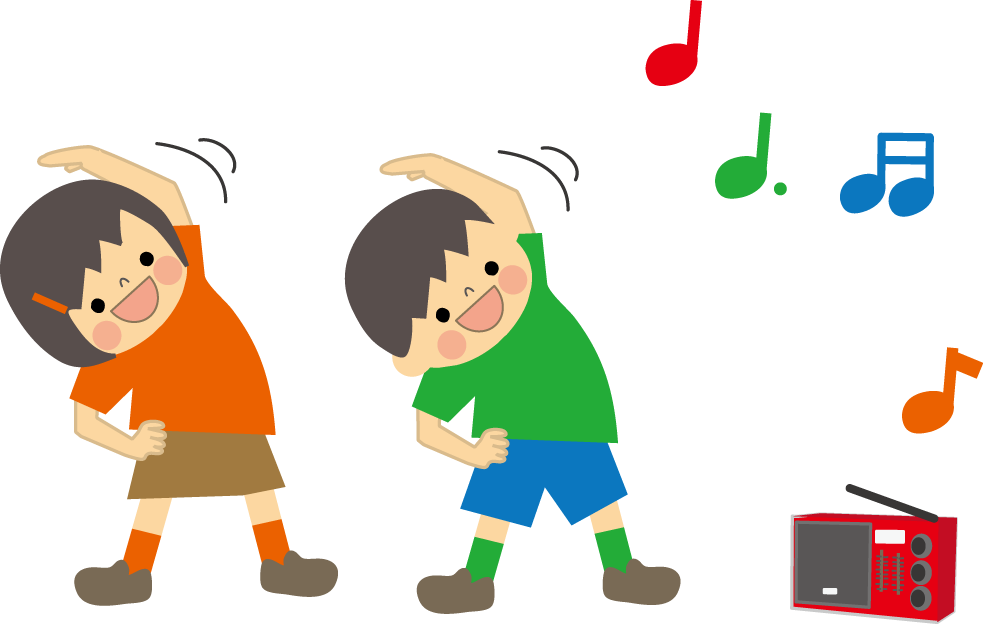 If you searched for images of 体操(“exercise” in Japanese), you would see a lot of images like the above.

It obviously depends on Radio exercise, and there is surely the pose in it. You know, “exercise” almost refers to Radio exercise in Japanese.

What pose do you imagine if you hear “exercise”?

Oh yes! Besides that, if you have a similar exercise in your country, please tell me!

It seems like “radio calisthenics” is correct translation. hm.